Silicate glasses are named as such because it is the empirical SiO2 unit that forms the majority of the glass structure. Silica is there for referred to as the network former. Unlike crystalline quartz, there is no long range order to these silica tetrahedra, hence it is referred to as being in the glassy, or vitreous state. Phosphates (P2O5) and borates (B2O3) are also network formers and readily form glasses. We previously discussed the benefit of borosilicate glasses wherein two network formers are employed with the minor borate network being fully incorporated into the silicate network. 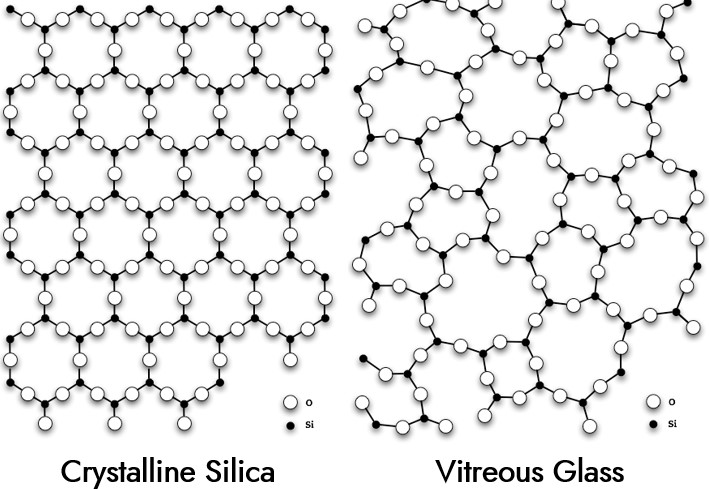 Network modifiers are chemical entities that are added to the glass to regulate certain properties but are incorporated in a form that is chemically distinct from the bulk of the glass network. For instance, the addition of sodium into silicate glasses. By convention the sodium content will be formalised as Na2O but actually exists as sodium ions (Na+) randomly dispersed throughout the glass-forming network. To achieve charge balance a network bond must be disrupted (Figure 2). Modifiers thus result in a reduction of the overall network connectivity or are said to produce “non-bonding oxygens” and can have a drastic impact upon the melting point, viscosity and electrical conductivity of the glass. 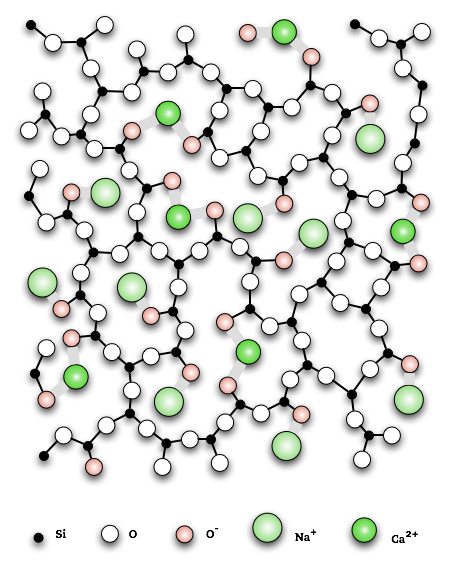 Intermediates, as the name suggests can behave as network formers or network modifiers depending on the overall glass composition. Titanium (TiO2), zinc (ZnO) and aluminium (Al2O3) are common examples of intermediates.

These classifications serve as a good practical guideline for glass chemists to target and predict physical property changes. It is however very challenging to make predictions with great accuracy, except when we consider a relatively narrow subset of glasses or additive concentration ranges. It becomes especially challenging when we consider changes we impart might be at the expense of a multitude of other properties we may also wish to control, such as colour or redox chemistry.

Most glass manufacturers use cullet, a form of recycled glass to minimise production costs. At Glassflake we use high efficiency electrical resistance tanks and a first-melt approach, meaning all of our materials are made from their constituent batch components giving us total control over the final product. Existing customers can always expect a consistent product but it also puts us in a unique position within Research & Development to trial custom compositions made to requirement. Feel free to contact us here if you have any such enquiries. 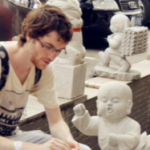 Lee has been with Glassflake since 2018, overseeing all aspects of Research and Development. Lee's work encompasses glass formulation changes, process developments and collaborating with customers to assist in their development projects involving glassflake technology.

Glassflakes are commonly used as a reinforcing agent to produce high performance composites through injection moulding. Wherein the high hardness and stiffness of glassflake is imparted upon a thermoplastic matrix. Furthermore they...

Glass Formulations: Tailored for Every Environment

Glassflake’s Nanoflake range is the result of a number innovations in both process engineering, glass technology and chemical design. In a previous LinkedIn post, we described some of the raw materials used...